Ready to travel through Europe at high velocity?

Train travel in Europe is more popular than ever and most of the train lines in Europe have been upgraded to transport passengers at high speed, especially in Western European countries.

But for the countries where high-speed train travel isn’t available just yet, it will probably be in the near future.

Obviously, this article will become abundant once all trains travel at high speed. For now, we made a small collection of the most interesting and popular high-speed trains in Europe, like we also made a list of all the night trains available in Europe.

As you can see on the map below, a lot of high-speed train connections are available in Europe, each of them operated by their respective local railway company or through a collaboration of different national railway companies.

Luckily, you can book tickets for these high speed trains or European bullet trains through online booking platforms.

Read these articles to plan your train trip with ease: 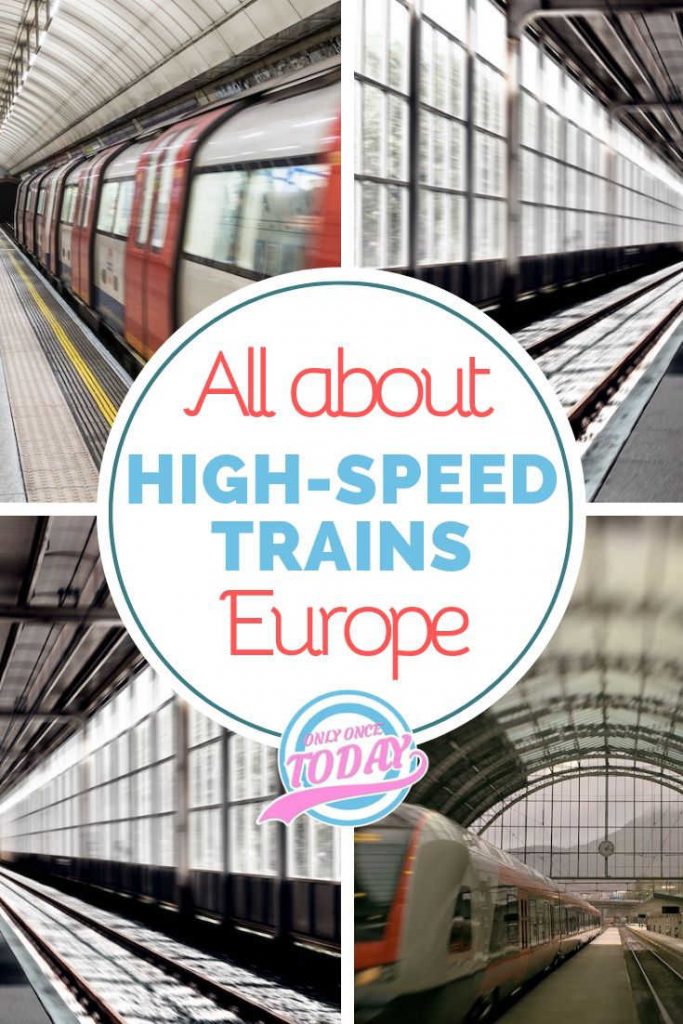 The TGV is a French train operated by the French SNCF. It has been operational since 1981 and is equipped with one of the best security systems in the world.

This high-speed train has been covering ground for a long time and it’s holding a worldwide speed record for conventional trains.

Eurostar, as well as Thalys, are sub companies belonging to TGV.

We listed them separately because they are very well known names in the high-speed train sector.
Book TGV tickets with Interrail or Eurail

The Thalys train is an international high-speed train that covers a lot of ground between France, Belgium, Germany, and The Netherlands.

The train operates on a set trajectory between Amsterdam and Paris.

Parts of this international connection has been available, at a slightly slower speed, since 1924.

In the seventies, you could get from Paris to Brussels in 2 and a half hours. Today you can do the same trip in 1 hour and 25 minutes.

Thalys currently operates with electric train models.
You can book the Thalys with your Interrail or Eurail rail pass.

The Thalys operates between major cities in:

All staff on the Thalys is multilingual: French – English – Dutch

The Eurostar shares a few railway tracks with the other high-speed trains in this list, but it is the only one so far that connects the European mainland with Great Britain, London to be more particular.

The Eurostar is, after all,  one of the only trains to pass through the tunnel under the sea between France and Great Britain and taking the Eurostar is an interesting experience.

Building the Eurotunnel to connect England to the mainland has faced a lot of ups and downs and for this reason, the projects had been aborted during early starts.

In 1988, the actual construction of the tunnel truly began and it was officially opened in 1994.

Another key point: the Channel Tunnel runs under water for almost 40 km.
The Eurostar is included in both Interrail and Eurail rail passes

The Eurostar connects major cities in four countries, but from these cities, a lot of different connections are available.

But there are no meals available between Brussels, Lille, and Calais

Check out these amazing routes in Europe to do by train:

Intercity Express trains are the flagship trains of the German rail system and it’s the high-speed international brother of the Intercity train network.

The Intercity Express first came into service in 1985 and these trains have the highest possible comfort level in the area they cover.

Prices are calculated station-to-station instead of at a per-kilometer fare.

The first generation of ICE trains was introduced to the world in 1991.

ICE Sprinter trains have fewer stops and travel at top speed to take you to your destination even faster.

You can book the Intercity Express with your Interrail and Eurail Rail pass.

The Spanish high-speed train network is called AVE and is currently still being expanded.

The Spanish AVE trains use the same technology used in the French TGV trains and the Spanish railway company RENFE collaborated with the French SNCF in order to create and expand their current high-speed train network.

Many of the AVE lines are already operational, but the Spanish RENFE is currently still expanding the high-speed rail network in Spain.

The first operational AVE line was opened for travelers in 1992 and it was the line between Madrid and Seville.

Other high-speed trains in Europe

A lot of European train travel is converting into high-speed train travel and most countries in Europe are working on the speed of their railway system.

So it’s very likely to encounter more and more high-speed trains in Europe. The ones we listed above are either very well known or covering a lot of ground.

Some of the trains mentioned above are international trains or have a night train version.

The trains we haven’t mentioned above are the Italian Frecce trains which also offer high-speed train connections in Italy and some of the smaller railway systems who only offer one or two lines to this date.

You can also check the Interrail website to see a full list of the current railway lines that already travel at high speed in Europe.