Europe is a diverse continent spreading over some of the most beautiful scenery in the world.

Apart from its thriving cities, Europe lends itself to landscape gazing and soaking up clean mountain air.

Somewhere in between sandy coastlines, rocky cliffs, and breathtaking snow-capped peaks, Europe is overflowing with great rail journeys and rail lines, some of which are definitely worth a detour.

We already explained how train travel can be liberating and relaxing and you can find more information about European night trains or an awesome train itinerary for Central Europe on our website.

Now we think you’re ready for a list of the most scenic train rides in Europe.

These are the 8 best train journeys in Europe

What we talk about in this article hide
The Semmering Line
Bernina Express
The Glacier Express
Jacobite Railway or West Highland Line
Rauma Railway
Cinque Terre
Bergen and Flam Railway
Montenegro Express
Conclusion: the most scenic train journeys in Europe

Semmering Bahn in Austria is number one in our list.

It’s not only a truly scenic route, it was also one of the most difficult rail lines to build and the first to be built over so many mountain passes.

In between the 15 tunnels this train travels through, you’ll get to soak in view after view. The route crosses 16 viaducts as well.

All this time, the tracks glide in between the Alpine peaks.

In 1998, Semmering became the first train railway to be included in Unesco World Heritage listings, because of the build difficulty of the track in early railway construction.

The railway first opened to the public in 1854 after years of planning and building in which over a thousand people died due to accidents and diseases.

That the building process was difficult is the least we can say. Altitude difference on this line is over 400 meters.

The actual Semmering Pass begins at Gloggnitz, but it’s probably easier to travel the longer track due to connection possibilities.

Highlights of the Semmering Line

Semmering Pass is a part of this railway and takes up 41 kilometers of the entire track. In this part of the line, most of the viaducts and tunnels are concentrated.

If you’re holding an Interrail or Eurail pass, the trip is valid for the use of those rail passes.

Reservations are not required for this train ride.

Check out these articles to plan your perfect train holiday in Europe:

The Bernina Express connects Italy and Switzerland while you can watch glaciers slide by.

At the highest point, this trip takes you up to an altitude of 2250 meters. The track winds through tunnels and glacier passes, traveling through more than 50 tunnels and crossing almost 200 bridges.

This train ride is known for its high difference in altitude. From start to end point the altitude difference is about 1800 meters.

The Bernina Express passes through the ski destination of St Moritz. Train carriages are equipped for tourists who want to enjoy the view and the carriages have massive panoramic windows.

Highlights of the Bernina Express

The highest train station en route is the Ospizio Bernina, which is a lovely sight. The Landwasser and Brusio viaduct are the most prominent landmarks on this route.

You can buy single tickets for the Bernina Express at the Rhaetian Railway website for 55€ in second class and 97€ in first class. Return tickets can be purchased as well.

Interrail and Eurail passes are valid for this trip.

Reservations are required for the Bernina Express trip. Seat reservation costs around 12€.

Not too far away from the Bernina track, you could also travel another one of the scenic rail journeys: the Glacier Express.

This is one of the most scenic train rides in Europe and it passes through a few of the same stops as the Bernina Express.

Depending on your travel itinerary, one of these two trips would do, unless you want to combine both in one longer trip.

St Moritz is the playground and ski resort for the rich, while Zermatt is awesome for hiking and it’s also home to the Matterhorn: a very Instagrammable mountain!

It’s a great idea to spend a night in Zermatt.

Be warned: this train moves pretty slow and it will take you around 8 hours to travel the entire journey.

Highlights of the Glacier Express

Landwasser Viaduct is also included in this trip. Rhine Gorge is also called the Grand Canyon of Switzerland.

Tickets and Price for the Glacier Express

Single tickets can be bought on the Glacier Express Website where you get to choose if you want to plan a package with accommodation included or rather a day pass for different parts of the route. Prices vary depending on the track of your choosing. The full journey will set you back around 135€.

If you hold an Interrail or Eurail pass, these travel passes are valid for the Glacier Express. You will still need to purchase a seat reservation supplement.

Jacobite Railway is the one of the best train journeys in Europe and it takes you back in time.

The old school steam train looks just as amazing as the scenery it slides through. Making its way through the superb surroundings of the Scottish highlands, the Jacobite Steam train travels all the way to the coastal town of Mallaig on the West Coast of the country.

Unless you plan on spending the night in Mallaig, round trips for this journey are advisable.

Pleasure trips on the Jacobite Railway are possible only in Summer and during Christmas season.

Note: there are toilets available for emergencies. They will be locked and you will be asked to hold your urges until you reach a train station where the train halts.

135 km round-trip. The outbound trip from Fort William takes little over 2 hours with a 20 minute stopover in Glenfinnan Station. In Mallaig, you get almost 2 hours to go for a walk or discover the little town. The return trip takes around 1 hour and 50 minutes.

Jacobite Steam train runs between April and October on specific times. During Christmas holiday season, a few rides are organized as well. Check the official Jacobite website to see if the dates match with your travel dates.

Highlights of the Jacobite train line

Tickets and Price for Jacobite Railay

Tickets can be purchased on the West Coast Railways website. Single tickets are 30€ while return tickets are 40€.

Interrail and Eurail passes are not valid for this scenic train ride since the company is not part of the regular railway system.

Check out these amazing routes in Europe to discover by train:

The Rauma scenic train ride in the South of Norway is commonly known as the wildest and most beautiful in the country.

This trip takes you past fjords, waterfalls and bridges.

You can choose if you want to travel the entire length of this journey at once or you want to plan a few stopovers and make time for majestic hikes in this beautiful area.

This train is considered a sightseeing train, which slows down at incredible sights.

The scenic train with sightseeing breaks is operational between the end of May and the end of August. In off season you can book the regular train between these two destinations. Prices are the same.

Kylling Bridge is just one of the 32 bridges you’ll cross during this train ride. Stavem horseshoe tunnel makes almost a full circle while traveling through a mountain side. Trollveggen cliff face is with its altitude of 1000 meters the highest vertical cliff face in Europe, located near Romsdalen Valley.

Single tickets can be purchased on the Nordic Rail Website for around 28€.

Interrail and Eurail travel passes are valid on this journey, but you’ll still need reservations.

Reservations are required for this trip and cost around 5€.

This short scenic train ride in Italy is very popular and often crowded. If you know what the Cinque Terre coats line looks like, you can already start imagining the scenery of this journey.

A lot of travelers spend their entire holiday in this part of Italy, but you can also discover the area in a short amount of time. See what you can do with one day in Cinque Terre!

The Ligurian sea with its cliffs and colorful villages.

Single tickets can be purchased in the Italian Rail Website for 3,6€ one-way.

Interrail and Eurail passes are valid for this trip.

Reservations are not required.

This seven hour trip from Oslo, the capital of Norway, to Bergen is one journey you don’t want to travel by night!

The scenery on this trip is world famous. In Myrdal, you can make a detour to the Flam Railway.

Sit back and relax while a luxurious train takes you through the most stunning scenery in Norway.

The Flam Railway is an optional extension to this trip that you probably shouldn’t skip! Flam Railway was called the world’s most incredible train ride by Lonely Planet in 2014.

Do you plan on visiting Norway? Read these tips about travel to Norway first!

Single tickets for both rides can be purchased at the NSB website.

If you’re holder of an Interrail or Eurail rail pass, you can use your pass as a valid ticket for the trip from Oslo to Bergen. Interrail Pass holders get a 30% discount for the Flam Railway.

Reservations are not required.

Crossing the border from Serbia to Montenegro can be done with this train trip.

It’s possible to ride the entire trip at once or break it up somewhere.

The Montenegro Express takes you through stunning landscapes, 254 tunnels, and 435 bridges.

Expect to see a lot of green everywhere you look, because during this trip you’ll travel through one lush valley after the other.

11 hours to cover 476 km. This trip can be split up into smaller sections.

At least one train every morning, all year long.

The Mala Rijeka Viaduct is one of the most impressive viaducts en route. The fortress of Lessendro is visible next to the train tracks while passing the beautiful lake Skadar.

Purchase single tickets at the Serbian Rail Website for around 26€.

Interrail and Eurail pass holders can use their rail pass as a valid ticket for this trip.

Reservations are required for this trip.

Conclusion: the most scenic train journeys in Europe

Train travel in Europe is easy and convenient. Did I mention Europe has some of the most scenic train rides in the world? Guess I did!

We only summed up some of the most interesting and scenic train rides, but there are many more. For instance, there’s also the amazing Golden Pass Train in Switzerland and quite a few others!

I remember how excited I was when we sam wildlife running along with our train while traveling through Poland and how that made this train ride just perfect for me.

Most of these scenic train rides can be traveled easily with an Interrail or Eurail pass. You can read more about train travel in Europe in our previous article about this subject.

How do you like traveling by train and which are the most epic train rides you’ve traveled?

Don’t be shy to let us know! 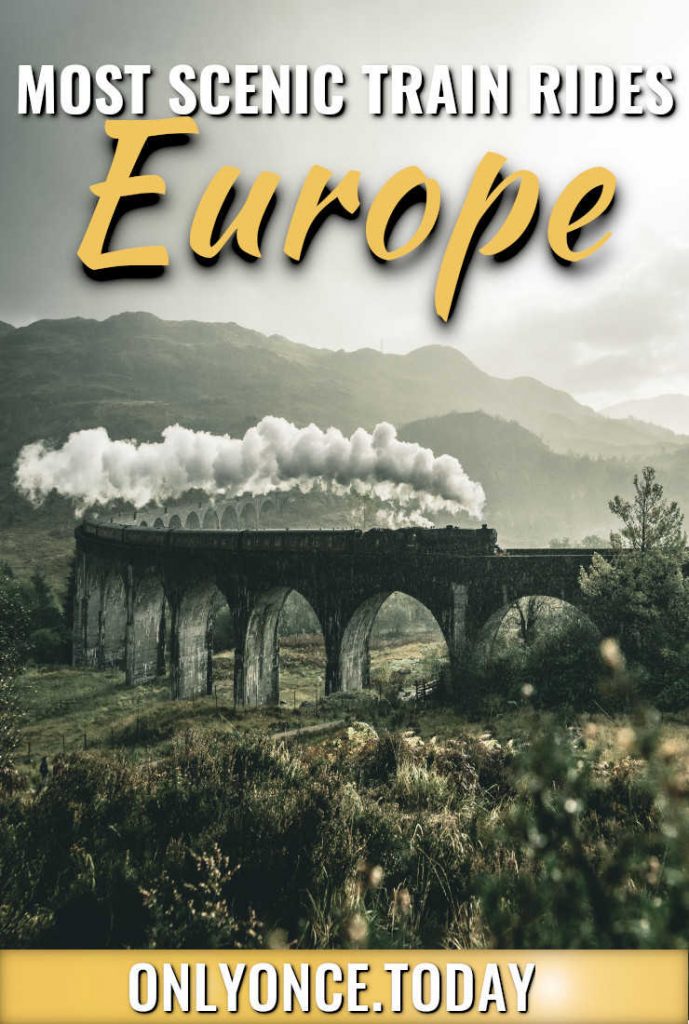 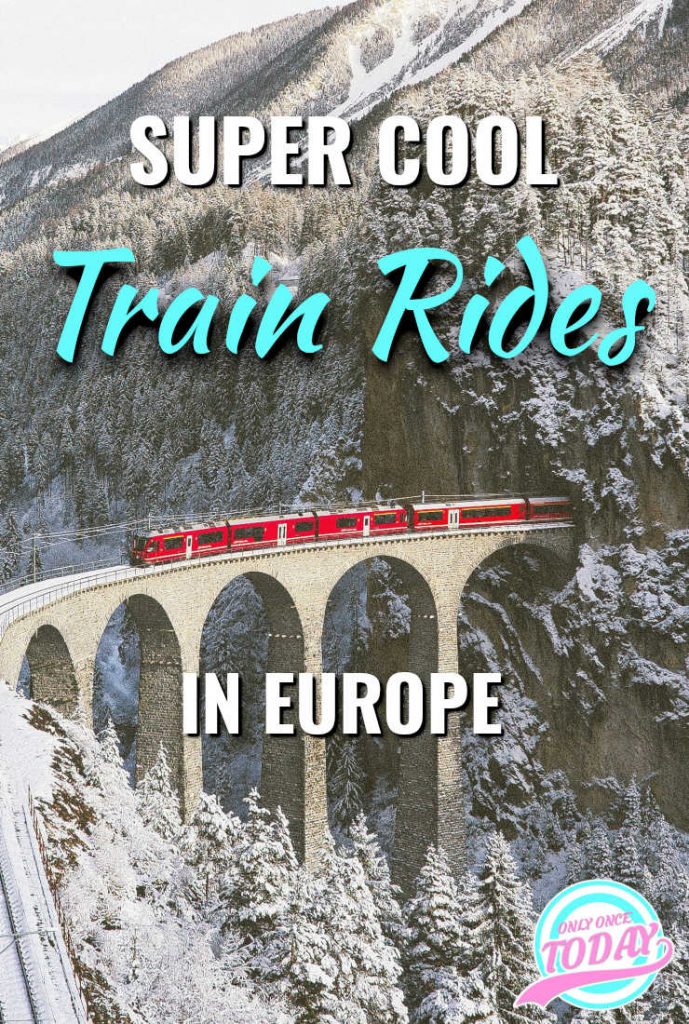 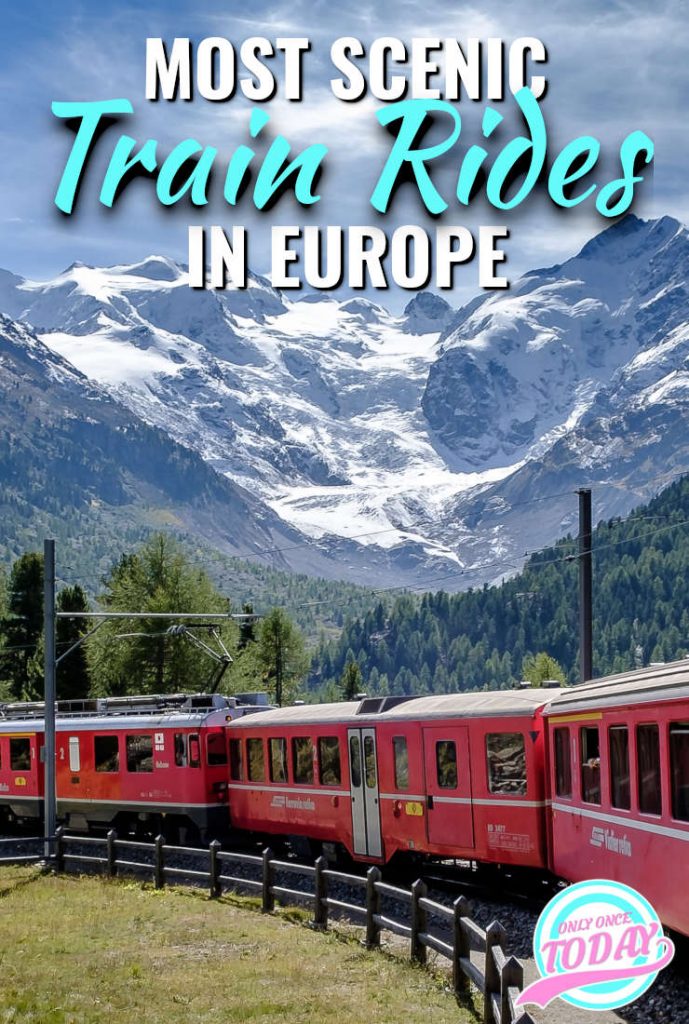 My name is Inge. I'm a traveler, writer and photographer. All those things I want to share with you. I've traveled a lot and wish to explore some more unknown territory.
Subscribe
15 Comments
Most Voted
Newest Oldest
Inline Feedbacks
View all comments